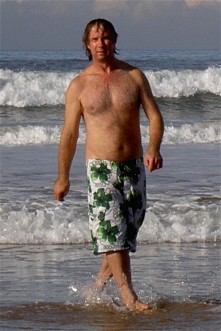 I was born in 1954 and lived with my parents in Berala, a suburb in western Sydney. I attended Birrong Boys High School and then went on to the University of Sydney from where I obtained a first class honours degree in Electrical Engineering in 1978, picking up a Bachelor of Science on the way through in 1976. After spending a year working for the Overseas Telecommunications Commission, I returned to the university to undertake five years of postgraduate research, obtaining my PhD in 1985. After a year working at Mondel and Associates Pty Ltd, I returned again to the University of Sydney as a lecturer in Electrical Engineering. Four years later I moved to Tamworth in north-western NSW where I worked for Carillon Development Ltd as the Design Engineer for the Carillon Radio Group.

In 1995 Carillon sold all their radio interests and I moved back to the coast, joining Innes Corporation Pty Ltd (now Sonifex Australia) as Senior Development Engineer, where I worked for 21 years before retiring in October 2016.

In spite of my advancing years, the little boy inside me is still alive and well. I get greatest pleasure from the simple things in life, like going barefoot everywhere, walking through the bush listening to the birds and taking in nature's beauty, or body-surfing at the local beaches. I hate dressing up - in summer I prefer wearing just board shorts wherever this is socially acceptable, and in winter I add a tee shirt or a pullover if it's really cold.

Since 1995 I've lived at Umina Beach, a suburb of Gosford on the New South Wales Central Coast, Australia, about 40km north of Sydney. This region between Sydney and Newcastle is renowned for its spectacular beaches, lakes, sandstone escarpments, waterfalls and extensive eucalypt forests. My home is close to the beach and the beautiful Brisbane Water National Park. The climate is cool to mild in winter and warm to hot and humid in summer.   My barefooting…

If you ever see me, chances are I'll be barefoot. I was born that way and as a child was always happiest when my feet were free. Being barefoot is a way of life for me - the feeling of lightness and freedom is as strong now as it was the first time I plucked up the courage to leave home unshod. I'm a proud member of the Society for Barefoot Living where fellow barefooters around the world share their experiences via the internet.

Being barefoot is healthy (most chronic foot disorders in western society are caused by shoes), it offers a much greater intimacy with the environment, it prevents static electricity from building up, and besides it's fun.

One rainy weekend when I was living in Tamworth I got bored and thought it might be fun to try writing a short science fiction story with some habitually barefoot characters in it. The end result was Barefoot to the Stars, a story about a group of university students who uncover the key to faster-than-light space travel.

Having caught the bug, I then decided to try a longer, more complex tale. Barefoot Times begins when 14-year-old Peter Thorpe moves to a country town and meets an Aboriginal boy who shares his love for astronomy, barefooting, and a destiny that reshapes time itself. This story ultimately became the first part of a much larger tale, growing into ten parts spanning sixty years and three generations in the lives of the characters. It's now been published in trade paperback and ebook format by Zeus Publications.

With one published book under my belt, everyone kept asking me if there was a second one in the wind. My initial reaction was no way, but the seed was sown and in May 2005 I started writing again. Five months and 112,000 words later, Call of the Delphinidae was finished, and is now also available from Zeus Publications. It's set in the same universe as Barefoot Times and tells the story of Aaron's parents: Mary, a Delphinidae priestess from the planet Bluehaven and Bobby, a computer technician from Narrabri on Earth.

The third book in the series, The Mind of the Dolphins, is set three years after the conclusion of both Barefoot Times and Call of the Delphinidae. This has also been taken up by Zeus Publications and was released in 2008.

The fourth novel, called Cry of the Bunyips, is set two years further on and was released through Zeus Publications in 2011. There's also a blog for this book at http://cryofthebunyips.wordpress.com.

Plight of the Tivinel, the fifth in the series, was published by Zeus Publications in 2015.

Rise of the Gomeral, the sixth and final book in the series, was again published by Zeus Publications in 2018.

Ever since moving to the coast, I've been intrigued by the Great North Walk, a 250km hiking track from Sydney to Newcastle through mostly national parks, state forests and bushland reserves, and which just happens to pass within a few hundred metres of my back door. Over the years I've walked sections of it, but one of my retirement goals was to do the entire walk from start to finish as a series of day walks, barefoot of course! I began my adventure on the 29th of August 2016 (coincidentally my mother's birthday) and completed it almost two years later on the 8th of August 2018.

You can follow the adventure with my diary and photos on the Barefooting the Great North Walk blog.

When living in Tamworth, I was a member of the Tamworth Bushwalking and Canoe Club and participated in many enjoyable walks in northern inland New South Wales. Since moving to the Central Coast in 1995 I've done many walks through the Brisbane Water and Bouddi National Parks, as well as participating in the annual NavShield Wilderness Rescue rogaine. Where possible I prefer to walk barefoot. - I enjoy catching the waves at the local beaches in Umina. - I obtained my full licence (VK2BYY) while still in high school and have been involved in amateur radio to some degree ever since. In the 1980s I served on the Council of the Wireless Institute of Australia (NSW Division), including one term as President, and also built the microprocessor-controlled broadcast consoles and VHF/UHF repeater systems at the Division's Dural station. These days I'm not very active but still enjoy the radio direction-finding contests at the various field days run in NSW.

Other books by barefooters…

Follow this link for more stories with a barefooting theme.